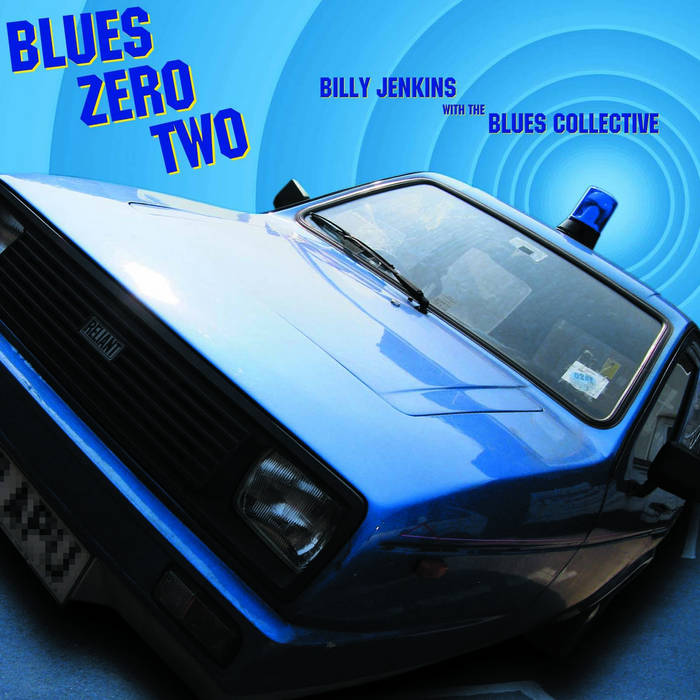 NOTE AS WE DON'T HAVE THE RIGHTS TO THE SONG A Virus Called The Blues WE HAVE REMOVED THIS FROM THIS VERSION OF THE ALBUM.


The 2002 CD 'BLUES ZERO TWO' is hardcore Blues Collective.
Trains, consumerism, food fads, work ethics and the socio-industrial infrastructure all come under the microscope - and this time we can guarantee there are no screaming kids, cruise ship organs, or 'kitchen sink' rattling.
Produced by Jon Wilkinson at Steam Room Studios in London's East End - BJ, Dylan Bates, Richard Bolton, Thad Kelly & Mike Pickering have been captured in all their raw magnificence, as they serve up another wry aural cartoon collection of society's foibles.
All pieces are BJ penned except Charles Brown's 'A Virus Called The Blues'.

'Life' had hardly hit the shops before the Blues Collective piled into Steam Rooms Studios to record Blues Zero Two. And three weeks in a lay-by off the A13 with Jon Wilkinson at the desks to record, mix, master and co-produce with the band left a nice warm studio ready for Alabama 3's third album sessions, to which Billy Jenkins and harmonica were invited before the Reliant team headed west. Any thoughts that the result might emerge a little rough or loose leave the building like Elvis on skates. This time the unexpected includes the timing. On the little hand a mere six months after the last one, and on the big hand it's one of those albums that's over before you know it.

The title track is a declaration of intent, swinging along in a trail of fiery licks a bit too satisfying on the itch to allow parallel attention to the verse lyrics. "How do you do, in Blues Zero Two," Billy stops to ask, as though concerned to the point of trying not to worry us, like a pep-talk before our little visit to the quack. Then his guitar sighs, carps and fidgets as a red light miles distant puts mass intertia on a city platform in a walking blues of the stranded, with due respect, as ever, to the suffering in This is a Day to Forget.

There are two pacy additions to the Jenkins canon of road compositions here, of which I'm Staying in the Car, a hoe-down shuffle worthy of Swamptrash, can be double-accounted as one of four songs about going nowhere. In this instance through the blues of having to go anywhere in the first place in a series of away-day duck-outs. I Wanna Stay Here is the other plea to stay put with a litany of rejected alternatives and a pop punch halfway to glam. The rhythm could be the Brain of Morbius doing a Mud cover and the guitars go off like two Zal Cleminsons playing in Lynryd Skynyrd. (Am I in What's He Like?) (Twice. - Ed)

Down in the Deep Freeze is Billy's saddest published lament since Cooking Oil, with a compassionate portrait of the wrong kind of chill. Over a slow bass and cowbell tick-tock and a shimmer of violin part horror film, part otherwordly fridge noise is the string guage scraping grind of a life under arrest in a shit job. Slavery blues with a Paris Texas slide, Spanish blues guitar and the vocal that gets Billy compared to Tom Waits in the reviews as his range continues its journey south.

There are some keenly observed sketches. Don't Eat that Cake isn't too far from a Steptoe & Son spat. I can imagine Tony Hancock doing I Want My Tea, thanks to one of BJ's suggested accompaniments. White Van Man gets acquitted like Don Giovanni gets acquitted in a Captain's growl solo vocal leading into a jazz funk road number on a dangerous career, like Motorway at Night on urban streets. Vroom, just lapped Jonathan Richman, parp parp, out-the-way Chic. Prime spazz heat flies off the Jenkins fretboard as it gets fast and heavy.

But the bluesiest blues is in the adapted cover of A Virus Called the Blues by Homer and Charles Brown. This is an aching spiritual for the blues you can't lose. "Go home, Charles William Jenkins," roars the doctor, "there ain't nothing I can do for you. Go home, I have no good news. You've got a virus called the blues." This is also the title of the still unbroadcast documentary and sums up the Blues Collective quite well. One imagines the next patient being told "Go home and suck a lozenge, David Archibald Coverdale, it's just a cold."