Born Again (And The Religion Is The Blues) 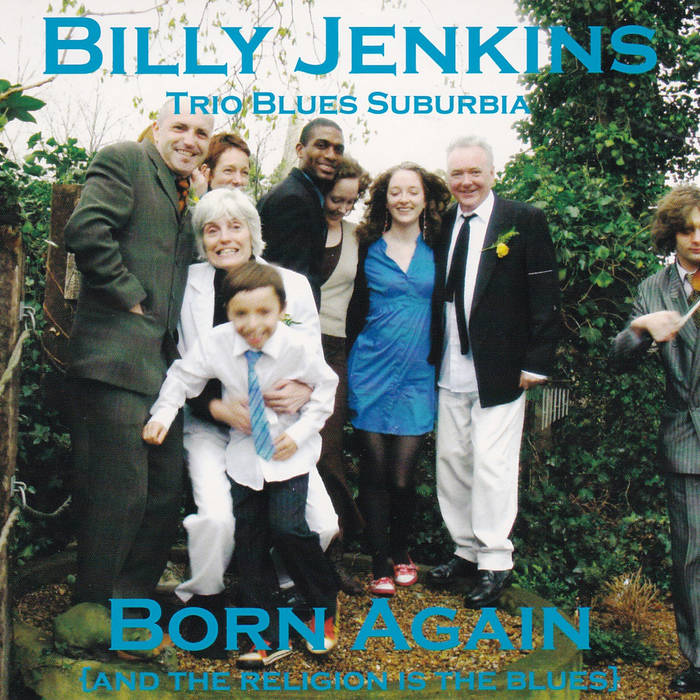 Billy Jenkins closes 2010 with the release of a new blues record, ‘Born Again [and the religion is the blues]’. The new album, recorded this spring, is a collection of blues morality tales written by Jenkins over the last decade. Released in November the album will be supported by a special one-off concert where Billy will perform with full orchestral backing from the BBC Big Band at London’s Purcell Room as part of the London Jazz Festival. The concert will be recorded by BBC Radio 3.

The new record glances back on ten years of life affirming episodes for the 54 year old composer. It’s all in there, in one way or another. it’s a story of a life of saying goodbye to the family home, caring for relatives who succumbed to Alzheimer’s, a marriage, a new career as a humanist funeral officiant, becoming a granddad, and a rising frustration as a working musician with the English Entertainment and Licensing laws and totalitarian tick box Heath & Safety paradoxes.

‘Born Again [and the religion is the blues]’ cracks open with a secular blues rebirth. The title track reaches down into Howlin Wolf/Dr John territory and is at once savaged by Billy’s wayward guitar and exhaulted by the secular gospel choir. The trad. electric blues continues as Billy cleverly picks apart ‘Get me to the church on time…’ with his own ’Ain’t Getting Married…” its dirty shuffle blues takes a swipe at wedding ceremonies, but finds Billy alone a second later in a 12/8 blues confessional about getting too close to your best friend’s wife in ‘I Felt So Guilty’. ‘I Hate Dogs’ changes the tempo and finds a curmudgeonly Beefheart-type Jenkins armed with his killer slide guitar in what is an incongruous and utterly brilliant exchange with a toddler who reprimands the bluesman’s dislike of dogs. ‘When The Parents Come To Stay’ captures the struggle of generation gap like no other - a thunderous intro and soaring violin sets the stage for this unhinged funereal lament with lyrics that tell of the stark reality of aging parents and the roles that inevitebly reverse -where bathtime companions are: “Steradent, Analsol, TCP, Warfarin”. ‘Chained’ with its air of resignation spirals more into a melancholia void but its up-tempo woodpecker drums, kazoo and gospel makes the bitter pill a little easier to swallow. Then to closing track ‘I Took A Walk’. Although weighed in suicidal ideation about ending it all in your friend’s pond, this is a soaring soulful ballad delivered with a left hook of wry humour and right of brutally honest lines. It stays with you long after the CD has stopped spinning.


Says Billy on the record: "Being able to walk away from the blues can lead to joy. But joy sends you straight back to the blues. And so the world keeps turning."

The Billy Jenkins Trio Blues Suburbia is formed of Billy Jenkins (electric guitar & voice), Jim Watson (Korg BX3 organ), Mike Pickering (drums). The trio are joined by a sprinkling of guests (there’s 28 of them on two tracks) and includes The secular gospel VOGC Junior League Choir and Dylan Bates on violin. All tracks were recorded this year except for the two tracks book-ending the record, which were actually recorded in 2000.

Billy Jenkins needs little introduction - in his forty year musical career he has played thousands of performances and has forty plus album recordings to his name. He is a blues guitarist and free jazz hero, Humanist funeral director, lapsed-lawn bowls captain, chess subversive, bandleader, and social satirist. He’s created improvisations for everything from chess tournaments to World Cup football. A professional rock musician from the age of 14, Billy has made his a world of rock, anti-jazz and the blues. He has always juggled musical form and freedom in his guitar playing, composing, band leading and performance – obsessively avoiding repetition and the constraints of commercial success he has always keeping things moving in his spontaneous genius way.