I Am A Man From Lewisham 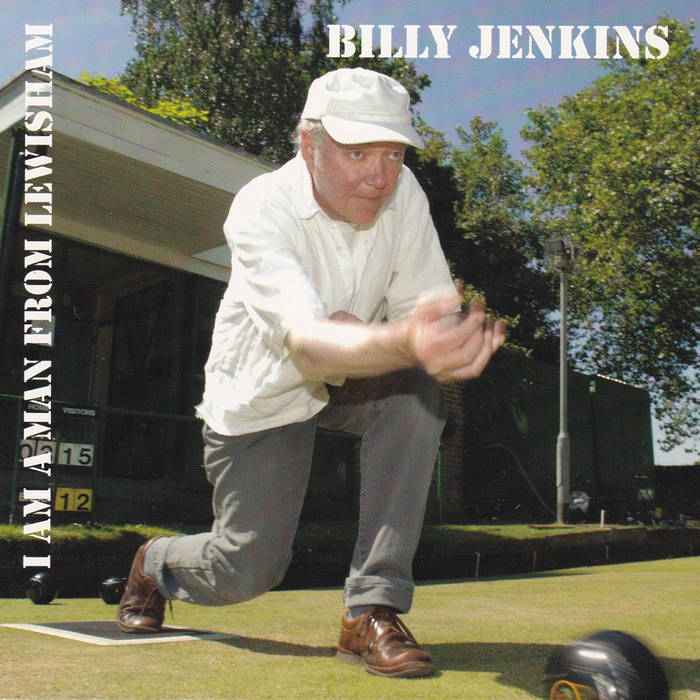 'Next to Jenkins, chroniclers of modern Britain such as Pulp seem like feckless dilettanti' - New Statesman

Billy Jenkins: guitarist, bandleader, lapsed-lawn bowls captain, sit-down comedian, chess subversive, bluesman, social satirist and conductor of Humanist funerals, A musical subversive he’s fired toy cars at audiences from a Scalextric set strapped to his guitar and has been known to take jazz musicians to motorcycle speedway meetings to get the 'risk' of musical improvisation into perspective. He’s created improvisations for everything from chess tournaments to World Cup football. He is, in short, a national treasure and if there is any justice with this, his fortysomething album release, 2010 must surely be The Year of Billy Jenkins.

For his latest record Jenkins has turned once more to the South East London suburbs for inspiration. ‘I Am A Man From Lewisham’, recorded in Greenwich, finds him at the centre of a wayward musical place where the spirit of scuffed-up bowling green lawns, raffles and pebble dash are summoned and given an irreverent splash by him and his motley crew.

Coming in like a kind of ‘evangelist group therapy’ this is cross-genre experimentalism from a crack team of musicians. The band, held together by Billy’s rabid guitar work, features iconoclastic drummer Charles Hayward originally known for his work with This Heat and Oren Marshall on tuba who can effortlessly cross from free form to nailing a tight bass line. Innovative improviser Gail Brand on trombone, Blues Collective member Dylan Bates on violin and pocket cornet, and Empirical band member Nathaniel Facey on alto saxophone (who met Billy when he was taught by him at the Royal Academy of Music) complete the line up. Spontaneously directed by Billy, the ensemble rides and falls on his ability to pick up on subtle inflections from his players and to capitalise on their instant creativity.

The album opens with Billy growling his way through ‘I Am A Man From Lewisham’ all galumphing blues, lyrics about low sugar jam, gospel backing and sound effects of starling tweets, police helicopters and fireworks. ‘On (Catford) Broadway’ is a joyful melody whose rag n’ bone bluesy chord changes summon images of emigrating Lewisham mallards stopping off in Times Square. ‘Francis Drake Bowls Club’ (of which Billy was captain for 3 years) finds a Transylvanian violin cavorting with a tuba waltz and ‘Deptford Market’ has a gleeful Billy and Oren bringing in the blues with a shuffle and a raunchy R&B solo from Nathaniel. ‘Church of the Ford Transit Mini Bus’ is a down-home crack the eggs on the grill pan barn dance with some sterling work from the ‘Paganini of Penge’ – Dylan Bates. And ‘Terraced Fast Foods’ offers contrast as sparse drumming becomes an Arabian melody of delicate pizzicato. Then it’s over to ‘Throw Them Blues In The Recycling Bin’ feat. VOGC Junior League Choir to close proceedings and remind us that in this age of climate change even the blues need to be recycled.

Says Billy: "They don't make records like this any more. Stuff a load of musicians in a recording room, switch the red light on and hear them resonate off one another, as they scrape sounds out of the air. We need the sound of people, not machines. Machines break down, as do people, but when musicians are a' buzzing it's the stuff of life! And we all need more of it!”

A professional rock musician from the age of 14, Billy has made his a world of rock, anti-jazz and the blues. He has always juggled musical form and freedom in his guitar playing, composing, band leading and performance – forever challenging preconception. Every next note is an imprint on the unknown, every bar a step into the void.