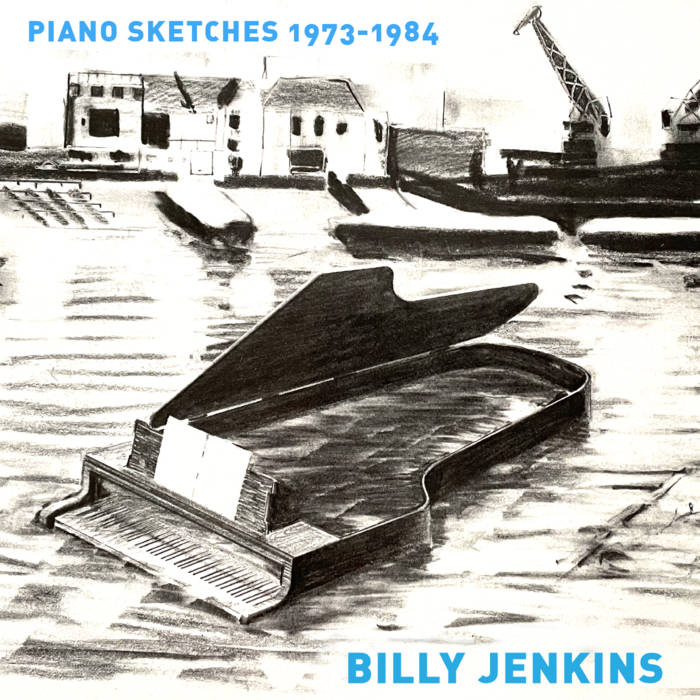 For a musician who, up to that date, has always earned his living on the periphery of the popular music industry to record an album of piano music takes a determined mind and a conviction of musical ideology.
To go one step further and record an album of piano music when the musician is a guitarist, adds elements of the bizarre, the unexpected and the unintentional.
But his ten years of touring and recording in partnership with saxophonist Ian Trimmer, first with Burlesque and then Trimmer and Jenkins, he never ceased exploring the new.
Coming out of a year touring with drummer Ginger Baker’s Nutters in 1981, Billy recorded and released the first VOG Collective album, ‘Sounds Like Bromley’. Then, radio sessions, and collaborations with One The Juggler, drummer John Dummer’s True Life Confessions, a short lived blues band with fellow guitarist Graham Lyle, guitar tuition, improvised piano accompaniment for technique classes at the Laban Dance School and outspoken but informative articles for Melody Maker and One Two Testing just about kept the wolves from the door – until June 1983, when he became the resident administrator of Wood Wharf Rehearsal Studios, owned by former barrister Michael Dunkerly alongside the River Thames in Greenwich, London.
Initially working eighteen hours a day, seven days a week, Jenkins spent the rest of the year turning the complex (which had already inspired the likes of Dire Straits, Kate Bush, Manfred Mann, Squeeze and Gerry Rafferty) into an innovative environment, facilitating both the creator and the artisan where, over his ten year tenure, he welcomed an average of 26.6 musicians through the doors every day.
Having got his house in order, he returned to his own music making, usually inspired by the musicians he met and heard at Wood Wharf. Several ensemble albums were planned and composed. But, before he recorded those, the guitarist felt it right to ‘start at the beginning’. Rather than accept a pay rise, he asked owner Michael Dunkerly whether he’d fund the pressing of an album, to which he kindly agreed.
So it came to pass that, on the 18th March 1984, using a majestic Bösendorfer 9 and a half foot grand piano and beautifully recorded and engineered by Julia Carney, Jenkins laid out his stall playing, what he described as, ‘composer piano’, bringing into the session compositions created between 1973 and 1984. Amongst them where two of them scored in his teens, one co-composed with Ian Trimmer and seven improvised on the day. One of these improvisations, ‘Donkey Droppings’, he later scored for the VOG Collective. Thus, the moment when heart, hand and mind combine can truly be heard on this recording.
Invention. In your ears. Then. And now….
This recording startlingly bookends the ‘Ghost Music’ album, the solo ‘composer piano’ album recorded 34 years later.
~
‘Billy Jenkins is a musical anarchist. Notably resistant to ideology, he espouses a version of the kitchen-sink Situationism which lay behind the British punk movement. If music has become business (an equation he rejects), then the only refuge is a kind of unselfconscious anti-technique which encourages the retention of ‘wrong’ notes and false starts.
He calls his own compilation of Piano Sketches ‘the result of musical suppression’. A response to certain assumptions about ‘professionalism’ and marketability. The themes are simple, unoblique, stripped of irony.’
* * (*) The Penguin Guide to Jazz on Record
‘Unlike the shaded stillness of dockland wastes which adorn the album sleeve, ‘Piano Sketches 1973-84’ buzzes with unbridled energy – and a penetrating dry wit. It’s a hop, skip ‘n’ jump from early ‘Tune-A-Day’ style ‘correctness’ to a now less evenly-polished finish – frenzied ivory chases and protrusive discords jammed into spartan structures from all odd angles. ‘Erik Satie meets Les Dawson’ suggests Mr Jenkins. I’d plump for Steve Beresford vs Blue Gene Tyranny with Fats Waller as ref!’
David Ilic / City Limits

‘In a sense, in a hand-made, working-class, South-East London sense, the 'Piano Sketches' is a composer's note-book made real, like Bach's 'Art of Fugue' or Bartok's 'Mikrokosmos.'