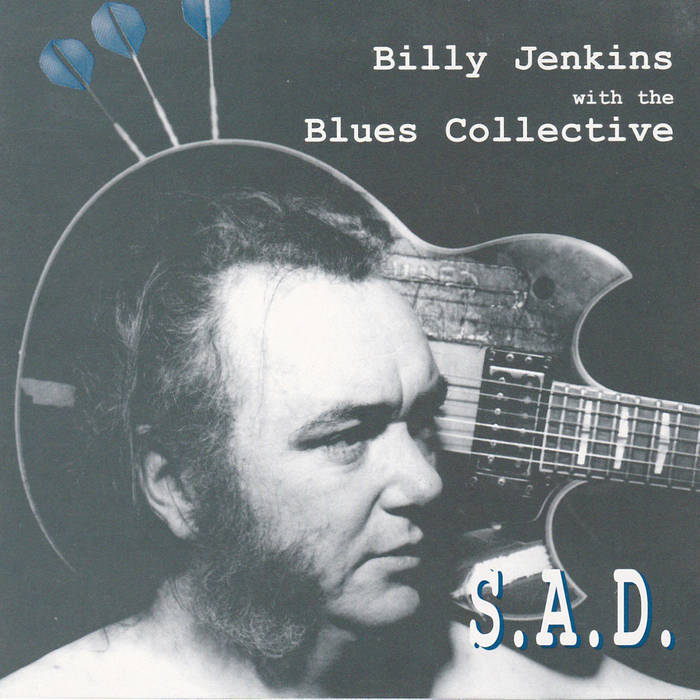 The first Blues Collective recording. BJ takes all the solos, Thad Kelly and Mike Pickering hold down the groove, whilst organist Dave Ramm and harp player Whispering Gerry Tighe gently caress the melancholia. The Fun Horns of Berlin are just some of the guests. Contains the classics 'Pissed Off Boy', 'Jazz Had A Baby (And They Called It Avant Garde)' and many others. In fact - twelve tunes. One for each bar of the blues.....

‘S.A.D.’ was Billy Jenkins’ first album with the Blues Collective. As the terrific musicians of the Voice of God Collective flourished in their own careers, Billy took a long overdue path back to his roots, at the same time developing his talents as a singer. The result is a more pared back guitar-based sound from the Voice of God exuberance, while losing none of the caustic Jenkins punch. The first couple of tracks set the pace and tone. The order of the day is fast characteristically ascerbic guitar-work while Jenkins lends a new meaning to the term ‘blues shout’. ‘Pissed off boy’ is pure Muddy Waters after a few lager-tops. Rapid guitar thrash threaded around funksome harmonica by Whispering Gerry Tigue. ‘Every night you turn away’ is a fine slow blues on a whiffy blend of harmonica and Dave Ramm’s keyboards, incorporating an extended solo on Billy’s guitar at its most BBesque. ‘Where did I stay last night’ is a more medium tempo number bemoaning the thrills of touring. ‘I’m on an island’ betrays Jenkins’ free jazz sensibilities, with a much looser feel to the earlier tracks; the deep dark ‘Where are you’ and ‘I’m stuck on you’ continue the theme of powersome guitar over incessant harmonica and organ beatfulness. The up-tempo instrumental ‘Walking back to crappiness’ is the first of three tracks joined by the Fun Horns of Berlin: ‘Jazz had a baby’ mixes off-the-wall brass flapping along to twiddle-finger fast guitar; ‘Give me the money quick’ shows all the band’s thunderous forces blazing, with an extra guitar thrown in to add to the buzz The closer, ‘Goodbye blues’, more of an appendix, is a lo-fi live recording and sounds like an attempt to capture the original recording conditions Blind Lemon Jefferson had to put up with- "I’ll be back someday" is just about discernible: and he was back, to where the blues first raised its gloomy gin-soaked nose.
This was Billy’s first album as out and out lead singer and so it is no surprise that his guitar skills take the fore. He runs the stylistic canon through Peter Green and Clapton, via Buddy Guy, Paganini and Ornette Coleman. Chorus after chorus plunges and quivers, as Billy shows he can fit fifteen notes into half a beat with the best of them. At the same time he makes full use of the simplicity of the blues, framing the musical phrases with stripped, functional work from his sidemen. British blues of course has a sumptuous history, taking in the Stones, Hendrix, Cream, T Rex, the Goodies and Basil Brush. An artistically successful modern blues album can either be suitably derivative or clearly expressive of the blues as evident in modern life. ‘S.A.D.’ is a believable album on both counts, pointing the way to many more years of the Blues Collective as a state-of-the-art purveyor of real music for real people played on real instruments. So far it hasn’t particularly caught on in the industry as a whole, but we can hope, can’t we?
© Richard Russell 2003