When The Crowds Have Gone 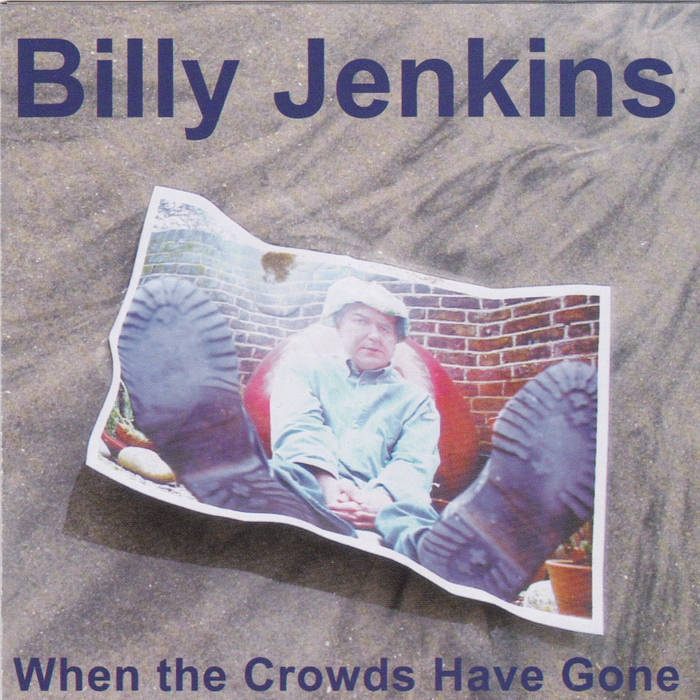 Due to copyright restrictions, ‘Trouble In Mind’, which appears on the original CD, is not available on Bandcamp

"A tour de force from a man who should be a national treasure.’

First released on CD in 2004, the original press release stated:

The inimitable Billy Jenkins returns with his most intense release yet. Armed with a handmade Lucas Parlour acoustic guitar, rack, and blues harp, he simply sings how he feels. When The Crowds Have Gone is a set of twelve deeply personal originals about heartache, cultural and social alienation, yet filtered through a uniquely witty perspective.

The album is alternatively summed up by the Bromley bard himself as a veritable blubfest from a bandleader without any bookings for his wonderful musicians. One minute washed up, the next one drowning. Isolation offset by the intensity of commercial intrusion. It's a world in which musicians are forced to trade in their mystique and magic tricks in order to earn a crust through education.

Recorded (with valuable contributions from bassist Steve Watts and violinist Dylan Bates on three tracks) during the hot summer of 2003, the complexity of new UK public performance laws hangs heavy in the air, making it a bleak period for the practicing musician. The future looks even more uncertain.

On When The Crowds Have Gone Billy seriously contemplates the stark reality of possibly seeking a non-musical subsistence. Yet "the blues is calling, calling me to sing" wails Billy on the track The Tide Is Out. Throughout his uncompromising career and own recording ventures, the blues has been a veritable lifeline.

Like some kind of perverse cross between John Lee Hooker and Mike Skinner, Billy, with gruff sensitivity, sets a despairing interior world against his background of kitchen sink reality, whether equating the 'jazz life' with the empty-hearted leisure plethora sanctified by reality TV on 'When Money's Really Tight' ("when money's really tight, dinner is a cook show on TV"), the desperately numbing solitude on 'Come Round and See Me' (…cause I'm a sad B.A.S.T.A.R.D"), or targeting rising urban noise levels and the contemporary quick-fix on 'Everything's too Fast' ("…at least I know my cruising speed. Not too slow for honesty, not too fast for greed.") Then Billy closes the set poignantly with the candid logic of 'Cry your eyes till they're red…'

Yet, in spite of its bleak subject material, When the Crowds Have Gone stops short of portraying a doomsday scenario. Ultimately, the warm vibrations of steel string and bittersweet vocal chord, captured with fine sensitivity and spontaneity by producer Pete Bennett leave the listener bathed in a reflective puddle of optimism and survival.

'Jenkins has to be heard to be understood, and nobody taking the risk will be disappointed.' Brett Callwood /Acoustic Magazine

'A mood of middle-age melancholia. The odd moment of humour and the inimitable guitar playing (notably Sitting on the Dock of eBay) leaven the message. His darkest record yet.' John Bungey / The Times

‘Humour of a somewhat dark and acerbic nature still runs through Jenkins¹s music, but what really impresses on this utterly compelling album is the lightly borne virtuosity that enables him to intersperse such an extraordinary variety of hard-driving blues guitar and harmonica playing with the dazzling post-bop runs that result from Jenkins¹s
30-year experience in the music business. A tour de force from a man who should be a national treasure.’ Chris Parker / Jazz At Ronnie Scott's


"Not a lot of people know this, but Jenkins once trod in Clapton's footprints, playing guitar with Ginger Baker's Nutters for a 40-date tour in the 1980s, "whupping Clapton's arse," (as Jenkins puts it) on elongated versions of Sunshine of Your Love. If, like me, you were disappointed with Tom Waits's Real Gone, I suggest you flog it on eBay and buy When the Crowds Have Gone instead." - John L. Walters/The Guardian

Recorded at Simpletone Studios, London SE22 by Peter Bennett, from Summer in Autumn 2003, into Spring 2004.