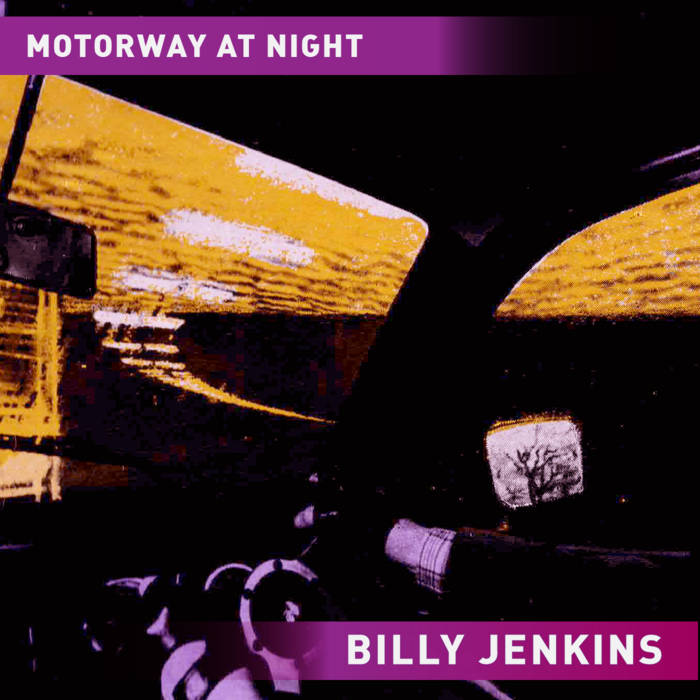 Motorway At Night was originally released on vinyl in 1988.
This album has been especially remastered by Andy Le Vien at RMS Studios for digital download direct from virgin vinyl. Thus, the sound that can be heard at the exit of Motorway At Night - 2 is genuine motorway/vinyl surface noise….
The original cover was designed to look like an innocent ‘New Age’ product, so Billy hoped the unsuspecting punter will purchase, return home in search of wan tranquillity, place the vinyl on the turntable, then drop dead from fright. Thereby realising the optimum potential of New Age ideology…..

Said Billy to Wire Magazine:-
‘I briefed the players for each 'Motorway' closely. Twenty minutes at 70mph, no U-turns, no stopping. I like to hear the person, the potential, the inherent skills. Every player who records with me knows that if they blow it, it will be documented forever.. We did no re-takes, no editing. We over-dubbed the String Trio using 'real notes' from 'real scores.'
By having a 160bpm click in the drummer's ear, we ensured a repetitive measure, thus placing lateral improvising into an 'easier to absorb' vehicle to those who might well turn off to improvisations less structured.’
~
A few tweeks on the old car horn and they’re off. Crazy. Crazy. Crazy.
There is no easy way to intellectualize this. It’s a musical frenzy. With Billy Jenkins at the helm (or in this case studying the road map), what else can you expect when Andy Shepherd, Django Bates, Iain ballamy and other Loose Tubs and like minded souls go loopy in a studio with nothing but their instruments, a theme and a canvas of twenty minutes to fill?

Yes, Billy Jenkins does it again. The non-aligned music vulture who draws on jazz but spits it out as if throwing tines of paint at the studio wall. Jenkins is a renegade rocker. Eccentric, some say – using jazz eclecticism, jazz humour, jazz up against the wall for execution by his own hand.
‘Motorway’ is senseless. Two twenty minute versions of the same song with few discernible rules for playing the game.
This Motorway is not being traversed by a man, blank faced in his penile extension BMW in the outside lane. We’re in a 3-wheeler playing dodgems and the film is going at twice the speed, with accidents happening every other second. Smoke billows, headlights upturn into the night sky, fires blaze and yet, miraculously, we survive to career ever onwards. We trundle off across the hard shoulder, up the bank and into the hedgerows and temporarily lose our way but still manage to win the race.

It's a celebration of the glorious madness within us which we fearfully deny. The desire to create, to play, to go apeshit. To recapture diverse parts of the self which go unexpected.

What’s even better is the fact that respected jazzers of the new Wave of Jazz (too often the old wave with new faces and a marketing boost) throw all the restrictions of that supposedly unrestricted genre to the wall and join in the fun. No reverence or stony silence accompanies their solos – the crashes and general mayhem continue regardless.

Jenkins doesn’t make records for records sake – enough people are into that already and making big bucks from it too. Each Jenkins release is an adventure, an experiment. Each is an excursion into territories new.
Verdict: the Yorkie Bar Kid says ‘YEAH!’
Phil England / Elephant Weekly

‘Stop looking po-faced and serious for starters. If you just listen, you might quite like it. It has a backbeat (but not 4/4), it has tunes, it has a sense of timing - in fact it’s “real music” just like it says, with interesting instrumentation and an ability to startle your ears (in the nicest possible way).’ Event South West Magazine

‘The ‘real new Age’ sounds of ‘Motorway At Night’ throb to a decidedly unrelaxing metronome setting and chaotic instrumental mixes. Jenkins’s Voice of God Collective draws on the work of his earlier Burlesque band and on it successor, Trimmer & Jenkins; ‘Motorway At Night’ also draws on the laddish big band Loose Tubes, who rehearsed at Wood Wharf Studios, Greenwich, centre of Jenkins’s operations.’
* * *(*) The Penguin Guide to Jazz on Record.

Recorded by Tony Messenger at at Waterfront Studios, Rotherhithe, London.
Followed by VOG String Trio and other overdubs and mixing.
PRODUCED BY TONY MESSENGER