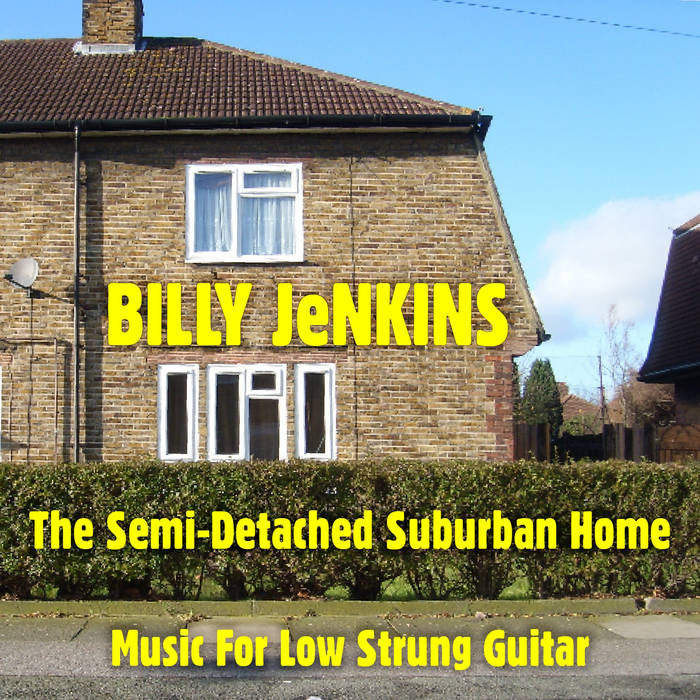 "Billy Jenkins 'new' album The Semi-Detached Suburban Home (Music for Low Strung Guitar) may date from sessions in the 90's but you need to hear it now. It’s my album of the year already and I'm confident that its still going to be at the summit when midnight strikes on 31 Dec.

It’s a Semi-Detached Suburban Home recording which takes you round the house of Life itself, or at least as close to Catford as you can be on this plane of reality. The music is sublime, a series of miniatures (i.e. always captivatingly brief) which veer from the reflective to the disturbing , the solo low strung guitar is a genius re-invention/adaptation of the guitar...indeed right across this divine work the familiar becomes unfamiliar."

• Music expressly designed for listening using the medium of the digital download.
• A solo guitar recording made available for concentrated listening as a near field headphone experience.
• As a digital signal is based on the simple binary formation: 1 or 0, so the solo performance – music at its simplest – can be expressed through the digital medium whereas ensemble played music loses out.
• Includes the finest quality digital silence between each track.

But sometimes one needs to get away from all that sweet and inspiring collective cacophony. As on ‘When The Crowds Have Gone’, the solo steel strung acoustic guitar album released in 2004 and now on his new album, the guitarist and composer needs occasional doses of solitude to recharge and refresh.

This collection of ‘carefully polished aural artefacts’ has never been released as a whole album - although two tracks were published on ‘Eclectic Guitars’ - Unknown Public UP6 in 1995 - the year that, under the watchful ear of producer Tony Messenger, Jenkins completed the project.

Billy spent ten or so minutes addressing the issue of guitar technique in a beach hut in Sardinia with fellow guitarist Gesuino Deiana in the December of 1993 ‘ the second only time ever I’ve discussed guitar technique with another guitarist’, where Il Signore Deiana had invited the Shakedown Club improvising trio (percussionist Steve Noble with Roberto Bellatalla on double bass and Jenkins) for a concert.

Returning home at the year’s end, Jenkins dropped his steel strung guitar two whole tones, so instead of E, A, D, G, B and E the pitch was lowered to C, F, Bb, Eb, G and C.

Slacker strings allowed for ‘detuning’ by bending the note before striking, then letting the note descend. Notes could also be bent upwards perhaps two whole tones. However it made block chording practically impossible. Universal ‘jazz guitar’ chord shapes were irrelevant. Folk style strumming was not possible either. Jenkins found he was able to enter a whole new world of guitar technique.
The pieces are arranged in six ‘rooms’. A walk through the semi-detached house he then resided in, in Lewisham, South East London – from hallway, through front room, the back room office, dining room, kitchen and then upstairs to bathroom and finally, the bedroom.

Wire, wood, skin and nail – all thrown into silence to create invisible audio images of everyday household objects and events.

And a new approach to the power of music is what is needed, Mr Jenkins avers, in the ever-noisier environments that we live in – where all spiritual essence of the musical form has been sullied by overexposure through recorded mediums - and the dilution and marginalisation of the musician by the many market led and undeniably seductive technological initiatives, apps and inventions has reached crisis level.

Mr Jenkins, as a musician and composer has always been sensitive to the requirements of the sound carrier, be it vinyl, cassette, CD or, in this case, digital download. The final object of the recording is very much part of the process and in the case of The Semi-detached Suburban Home this is perhaps the first recording that he feels works best as a digital download and as a ‘near field headphone experience’.

So don’t be left out in the sonic blizzard! Come on in and warm your fingers in front of the digital fireplace of our ‘Semi-detached Suburban Home’!